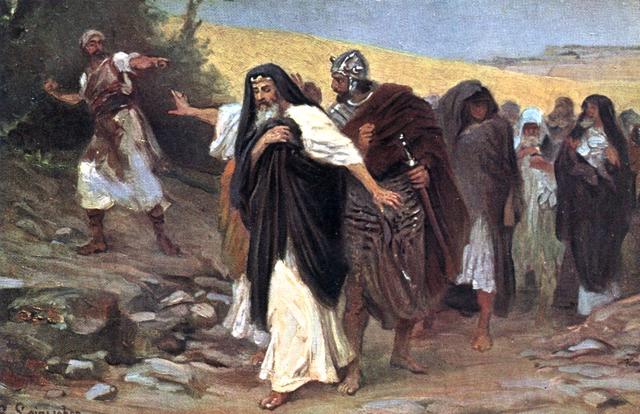 ANOTHER WAY TO GET MERCY AND FAVOUR FROM GOD.

Blessed be the name of our Lord and Savior Jesus Christ.

There are are many ways through which we as Christians can draw God’s favour and mercy upon our lives.This includes being prayerful, generous, forgiving others,and so on.

But there’s another secret toward finding mercy and favourable acceptance in God’s sight.Such that even if,for example,we have done what is wrong before God,he may relent from punishing us,and instead be compassionate unto us.

It is needless to “take revenge” on those who do us wrong.Also,it is wrong for us to “gloat over” our enemies when they fall.This is the secret we should apply in our lives if we want to get God’s mercy and favour.

Today unfortunately,many people especially Christians , from lack of knowledge,think that God takes pleasure in their enemies’ downfall.They are always praying and waiting with anticipation for evil or misfortune to overtake their foes;so that they may rejoice.(Like Jonah,who sat under the vine waiting to see the city of Nineveh destroyed by God.)

This is usually as a result of what we are taught or have learnt.Little do they know that what they do is against God’s will.It is wrong for us to rejoice when our enemies stumble or fall.If God were angry with your enemies,I think he wouldn’t have created.The fact that you see them live means that it’s God’s will for them to be there.

“Rejoice not when thine enemy falleth,and let not thine heart be glad when he stumbleth.

Lest the Lord see it, and it displease him, and he turn away his wrath from him.”

God is displeased when we gloat over our enemies’ downfall.He does not bring low your adversaries in order to destroy them completely!Rather, God is intentional toward humbling them and not otherwise,as you might think.

When you rejoice and be glad because your enemy has fallen,God is not pleased.He will therefore cease from punishing them,and instead redirect his wrath upon you.Remember,you also have faults and many shortcomings.So,do not think or feel that you are perfect and deserving no punishment.Only that God has compassion on you and is patient with you.

Do not be hasty to return every evil or repay any hurtful deed that is directed toward you.You don’t have to accuse before God those who criticize,gossip, blame, spitefully treat you or persecute you without cause.Pray for those who hate and spitefully use you that God may have mercy on them and help to blame to become changed people.You will be honored by God as being wise.Thus,you will gain abundant mercies and great favour in the Lord’s eyes.

Do not be hateful or take offense with those who hurl stinging barbs and curses on you.The curses are but blessings to you.God watches ,sees, and hears everything.Do not fret or be alarmed by the curses and accusations people make against you.Do not be troubled because of the sorrows they cause to you nor lament for how they treat you.In all this,God will comfort you and you become greatly favoured by him.

David knew this secret.When he was cursed or accused by his adversaries, David did not pay back.Neither did he ever rejoice at their fall.David never sought to avenge those who hunted for his life so as to destroy him.In fact,when his son called Absalom died,David mourned for him.Similarly, David also mourned over the death of Saul.Yet both had become his greatest enemies.

Why did David choose not to curse those who cursed him?He knew that HIS BEING CURSED BY THE ENEMIES WAS FOR HIM BEING BLESSED BY THE LORD.

While he fled from Absalom,David met on the way a man named Shimei who began to curse him.But David did not speak a curse in return,nor did he kill Shimei.Although it would have been easy.

“And when king David came to Bahurim, behold,thence came out a man of the family of the house of Saul whose name was Shimei,the son of Gera:HE CAME FORTH, AND CURSED STILL AS HE CAME.

And he cast stones at David and at all the servants of king David:and all the people and all the mighty men were on his right hand and on his left.

And thus said Shimei when he cursed, COME OUT, COME OUT,THOU BLOODY MAN, AND THOU MAN OF BELIAL:

The Lord hath returned upon thee all the blood of the house of Saul,in whose stead thou hast reigned;and the Lord hath delivered the kingdom into the hand of Absalom thy son:and, behold,thou art taken in thy mischief because thou art a bloody man.

Then said Abishai son of Zeruiah unto the king,Why should this dead dog curse my lord the king?let me go over,I pray thee,and take off his head.

And the king said,What have to do with you,ye sons of Zeruiah?so let him curse, because the Lord hath said unto him,Curse David.Who shall then say, Wherefore hast thou done so?

And David said to Abishai,and to all his servants,Behold,my son,which came forth of my bowels, seeketh my life:how much more now may this Benjamite do it? LET HIM ALONE, AND LET HIM CURSE;FOR THE LORD HATH BIDDEN HIM.

And as David and his men went by the way, Shimei went along on the hill’s side over against him, and cursed as he went,and threw stones at him, and cast dust.”

How about us?What is our attitude towards those who mistreat us?Can we really be patient with those who persecute us without cause?Can we forgive those who do us wrong,not taking revenge on them?Are we able to withstand the accusations made against us by our enemies?Can we really sympathize with or be compassionate toward our adversaries when they fall?

Attaining this level of spiritual maturity would mean that we should be ready and willing to bear the accusations made against us by our foes.We must accept the curses that come upon us from our enemies.When we do this,God bestows upon us his mercy and favour.David did accept and bore all wrongs and curses from his enemies, and said this;

“LET HIM ALONE, AND LET HIM CURSE; FOR THE LORD HATH BIDDEN HIM.

He knew that for him to find good, mercy, favour and blessings from God,he needed to accept the curses and accusations made against him by his enemies.

The Bible also tells us about Job as one who never rejoiced at his enemies’ downfall.This saw him gain much favour in the presence of God.The Lord God regarded him as a man who was blameless and upright than all who lived under the sun at his time.

“If I rejoiced at the destruction of him that hated me,or lifted up myself when evil found him:

Neither have I suffered my mouth to sin by wishing a curse to his soul.”

If you desire to get blessings, mercy and favour from God, you must like David and Job did.This is a tough command it seems,but we must obey it for us to please God and find favour with him in our lives.

The sermons and teachings upholding the idea of taking revenge on our enemies,or getting even with our wrongdoers are misleading and a message of hell.Contending with those who contend with us is a profitless job.Wishing evil to befall our adversaries and waiting to see them fall for us to be glad is wrong.Though it may appear as a wise thing in the natural way.The Lord Jesus said:

“Ye have heard that it hath been said,Thou shalt love thy neighbor and hate thine enemy,

But I say unto you, LOVE YOUR ENEMIES, BLESS THEM THAT CURSE YOU,DO GOOD TO THEM THAT HATE YOU,AND PRAY FOR THEM WHICH DESPITEFULLY USE YOU AND PERSECUTE YOU;

That ye may be the children of your Father which is in heaven:for he maketh his sun rise on the evil and good,and sendeth rain on the just and on the unjust.

For if ye love them which love you,what reward have ye?do not even the publicans have the same?”

Do you long to apply David’s secret?Do you want to receive good, mercy and favour from God?Be prayerfully patient with those who criticize or utter curses upon you.Remember,even Christ himself was mocked,treated with contempt,accused and ridiculed.But he endured all this for our sake.

The Lord JESUS IS COMING AGAIN!!