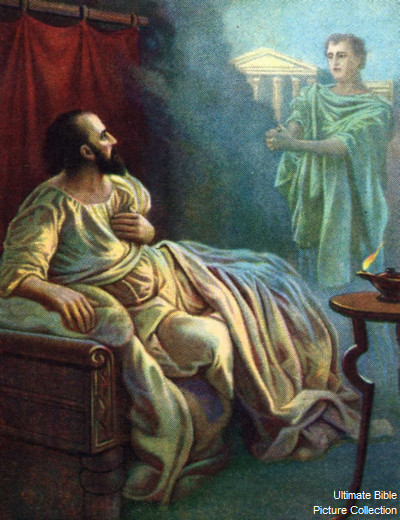 CROSS COME TO MACEDONIA AND HELP US

I invite you to consider together the following scriptures, I believe there is something you will learn at the end of the lesson.

Acts 16: 6-9
6. Now when they had gone throughout Phrygia and the region of Galatia, and were forbidden of the Holy Ghost to preach the word in Asia,

7. After they were come to Mysia, they assayed to go into Bithynia: but the Spirit suffered them not.

8. And they passing by Mysia came down to Troas.

Most of us know the only obstacles the apostle Paul went through to preach the gospel came from the devil, but we do not know that there were times when God Himself prevented Paul from preaching the gospel even though He desired to do so.

God does this not because He does not want people to be evangelized like Satan, no, but it is His habit to give priority to those who show a thirst for knowledge of Him.

To fulfill these scriptures.

Matthew 5: 6 “Blessed are they which do hunger and thirst after righteousness: for they shall be filled.

If you look at the verses you will see, God did not forbid Paul to go to any of the cities mentioned above, but he did reach out and pass over, showing that if there was a willingness of the inhabitants there to desire to know God then they would first hear them, then they would follow the others.

Try to think he arrives in Phrygia, he just wants to start preaching God forbids him, he leaves he goes to the next city of Galatia there and God stops him he leaves again he thinks maybe he will go down to other Asian cities (such as Ephesus, Smyrna, Pergamos, Laodicea etc.) but there God tells him not to preach anything he leaves…

He doesn’t stop there he leaves again Asia arrives at a city called Mia to start preaching yet God forbids him, he arrives at Troas still God does not approve, while now he is in Troas on the very outskirts of the city then God shows him a vision that showed how The Macedonians needed a lot of spiritual help.

Then you will see it costs him Paul crossed the sea now to travel to the Macedonian cities of Philippi, Thessalonica, and Beroea. To preach the gospel. It is not an easy task.

In order to understand better try to make a picture one of the Man of God comes from west Africa let’s say Ghana, he reaches central African countries such as Congo etc., God tells him not to preach, he reaches to our East African countries, He starts in Uganda he is told to pass, he arrives in Kenya he is told to pass, he arrives here in Tanzania, still God tells him not to preach there, now he has crossed all over from Kigoma, while in Dar es Salaam, God tells him to board a ship and go to the nation of India. There are my people there who need help to get to know me.

1. Moreover, brethren, we do you to wit of the grace of God bestowed on the churches of Macedonia;

2. How that in a great trial of affliction the abundance of their joy and their deep poverty abounded unto the riches of their liberality.

3. For to their power, I bear record, yea, and beyond their power they were willing of themselves;

So what do you and I learn?

God is the same yesterday and today and forever, if most of the churches in Asia do not deserve the grace of salvation first, He will do the same for us if we are not ready to receive it.

We have to ask ourselves. our hearts are really thirsty to know God, so much so that spiritually God compares us to the people of Macedonia? .. Cross over, come to Macedonia and help us ?. Are we really showing that we need God’s help? Do we deserve help? And how do we show our need for help? That’s is where God will open the way to us and help us in a miracle way.

How do we show ourselves that we need help??
We show it by our own efforts and find him with our energy efforts, with our all mind, with our whole heart and our whole spirit.

May God bless you.

MOUNTAIN OF THE LORD.

WHO IS YOUR DEFENDER?

SOMEONE WHO IS NOT WITH ME IS OPPOSED TO ME.